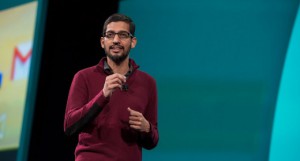 Google’s annual I/O developer conference, when the company rolls out its plans for the year ahead and what developers, businesses and consumers can expect to see in the near future, is always an interesting time for mobile, but this year has seen more focus than ever before on expanding Google’s mobile ecosystem and embracing new channels. Sundar Pichai, senior vice-president of products at Google, called it “the moment of mobile”.

Perhaps the most notable announcement was the introduction of Android Pay, a new payments solution that will be native to the firm’s mobile operating system. In addition to supporting NFC payments at point-of-sale, the system will enable merchants to integrate payments directly into their apps for selling physical goods and services, making use of the Android Pay API rather than third-party services like PayPal.

Google has lined up an impressive array of partnerships ahead of Android Pay’s rollout, with AT&T, Verizon and T-Mobile all pre-installing the solution on devices running Android 4.4 or later, and brands including Best Buy, Staples, Nike, McDonalds, Walgreens and Macys all supporting the service in the near-term.

The company’s existing payment system, Google Wallet, will be reimagined as a peer-to-peer app for sending …read more